Here we are, at the end of May already, and look at how many 5-gallon pails are plumb full of tabs. WOW!!! The kids and their families went above and beyond what was expected. The tabs were weighed at the SD Ronald McDonald House in Sioux Falls today and, drum roll please…..Hill Elementary collected a whopping 144 pounds of tabs. 💪👍👊 Kudos to the students and families of Hill Elementary School! 👏👏👏 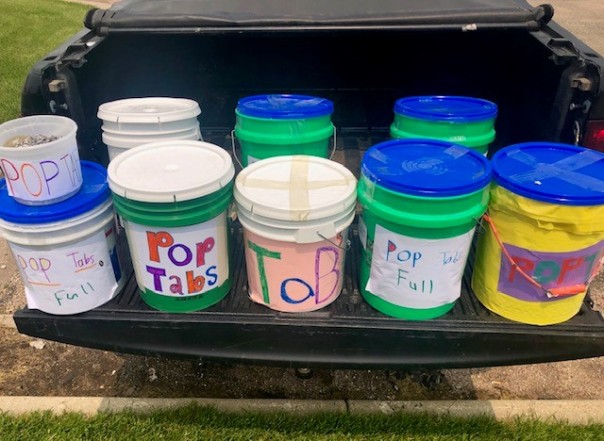 To Hill Elementary School students, parents, administration, faculty, and staff…thank you from our family to yours! My son shares his thanks in the video below. ❤

It takes a village. That is for certain. As the wise Prince has shared, “Dearly beloved…we are gathered here today to get through this thing called life.” Together. None of us will actually make it out of here alive – so let’s make this life a better “thing” and a better place to be, to live, to love.

As many of our readers know, my nephew, Carter Boerboom, passed away on June 30, 2015. We usually dedicate an annual blog in his honor and memory. This one comes a little earlier than usual because we need your help. Yes – you… your help. We are hoping to win a little friendly competition hosted by the Minnesota Timberwolves. They are going to remodel a court in southern MN, and Marshall has been selected to be one of the possible sites.  We are asking you to please vote daily to help us bring “Carter’s Court” to Marshall. This is possible with the help of those who proposed the idea and have worked to make the dream almost real. Voting ends on Friday, May 24th– so don’t delay. With your help and votes, this dream can become a reality.

Our Courts. Our Future. – Timberwolves

Carter loved life, and he loved basketball. Help us pass this love for life and love for the game to many more to come in Marshall, Minnesota and surrounding communities.

As a Professor of Education, I have the privilege of visiting many schools in my area, usually while supervising student teachers. The most recent high school I visited caused me some heartache! Granted, I realize it is almost the end of the year so that may be why, but wow…what I witnessed in the hallway between classes was discouraging.

Let me share this story. While I was visiting with a teacher, the bell rang. This young teacher stood up and headed to the hallway.  I joined in by standing outside the door with the teacher. Looking up and down the hall, I did not see any other teachers outside their doors. That doesn’t mean they weren’t there, I just didn’t see any. I asked this teacher if all teachers were expected to stand out in the hallway during this 3-4 minutes passing time. The answer I expected…YES!

When two boys came around a corner, I saw one of them punch the other in the stomach. The hit wasn’t just a friendly little tap. Nope, it was a solid punch! The one who was socked in the gut turned around to go after the kid who punched him. I automatically went into teacher mode and yelled “HEY…STOP” while the boy who did the punching is yelling “I’m f’ing pissed now” as he was backing away.

Those weren’t the only nasty words flying around in the hallway. Other comments made by these high schoolers were:

“They are so pissed.”

When the teacher I was standing with asked the students to change the way they phrased things, one response from a student was “It’s called freedom of speech…”

Seriously? Is it really? Is swearing and cussing and profanity considered freedom of speech?

I asked Alexa that question. Alexa’s response…“Hmmm…I’m not sure about that?”

Next, I texted my lawyer son the same question. His text back…

Okay, Google…what do you have to say about this complicated issue?

So…would “Now I’m f’ing pissed” fall under that category since the kid punched another kid then said the words??? Would his words be considered fighting words?

In another article by Hudson Jr. (2017), he stated that “profanity can be regulated, however, under certain circumstances consistent with the First Amendment. Profane rants that cross the line into direct face-to-face personal insults or fighting words are not protected by the First Amendment” (para. 4).

My lawyer son was right. Case by case. Good grief. No wonder teachers don’t want to say much to those students who spew foul language. Do not be dismayed…

There is some hope for public schools when dealing with this issue. Freedom Forum Institute (n.d.) offered these words of reassurance, “Though public school students do possess First Amendment freedoms, the courts allow school officials to regulate certain types of student expression. For example, school officials may prohibit speech that substantially disrupts the school environment or that invades the rights of others. Many courts have held that school officials can restrict student speech that is lewd” (para. 3).

When I taught fifth graders, I didn’t even allow the word “sucks.” I asked my students to please not use that word as it was offensive to me. It means “to inhale vigorously.” One year while at a basketball game, one of my former fifth graders came to sit by me on the bleachers. Josh was then a junior in high school (he’s in his 30’s now). He was sharing a story with me and ended with “Doesn’t that just inhale vigorously, Ms. Schoolmeester?” I laughed and laughed. He remembered. And he honored my wishes that many years later.

I’m not a fan of swearing. In the same breath, I will never stop caring for kids because of their foul mouths. Parents…please teach your children that swearing is ugly. Take advice from Will Smith’s grandma…

Smith said, “She found my rap book and she never said anything to me but she wrote in the back of it ‘Dear Willard, truly intelligent people do not have to use words like this to express themselves. Please show the world that you’re as smart as we think you are. Love Gigi.’”

God bless grandmas!!! Their gray hair is a sign of wisdom. ❤❤ 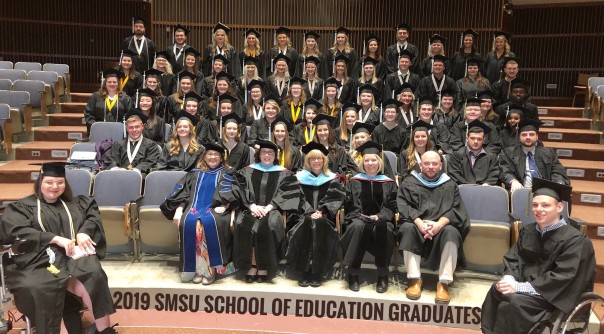 Graduation…it’s a joyful day. A day long awaited for. From the day you all stepped on campus as freshmen to this day when you had the privilege of walking across the stage with a heart full of joy as you received your diploma. 👨🏼‍🎓👩🏼‍🎓🎓

While I was driving to campus this morning to celebrate with you, I heard a song on the radio by Jonny Diaz called Joy. It is a song that gives you happy feet so if you would like to do a little dancing on your graduation day, check it out: 🎶

While I listened to Jonny sing the words, I realized how much they apply to your graduation today, and how much the words apply to when you begin your journey into the wonderful world of teaching this fall:

Have joy down in your soul

Take it with you wherever you go!

Don’t worry about what you don’t know

You’ll be alright as long as you’ve got joy!

In the jet black night, you’ll see the stars.

Let joy be your strength

Let it be your truth, and see you through!

Let it be your hope, be your shield

Let it lift you up, no matter how you feel.

You’ll be alright as long as you’ve got joy. ~ Jonny Diaz

Some days will be hard during your first year of teaching…really, really hard. Don’t give up. Don’t give in. KNOW you are champions for children. Be joyful with those children. They deserve it! Keep choosing joy every single day.

To our ‘former’ students and now our teaching colleagues…congratulations, SMSU School of Education graduates! 🙌 (Sorry about all the pics of me… 😉🤷‍♀️. Email me some and I’ll add to the slideshow! 👍).

The powerful moments shared with your students are priceless. A smile, a wave, a ‘good morning’, a handshake, a high five, a listening ear, an empathetic response, a gentle nudge, a laugh, a cry, a safe environment, a calm demeanor, a ___________. Fill in the blank! You offer our kids these powerful moments each and every day. And why?

Because you LOVE kids, you LOVE what you do, you want to make a difference! You want to inspire and encourage your students and you want to role-model this because you might just be their only hope! Thank you!!!

Thank you for never giving up on our kids, for offering endless patience, for loving them unconditionally. Thank you for letting kindness and love thrive in your classrooms and your schools!

For all of these powerful moments, we say THANK YOU! 💪👏😍