Stay the course.  Don’t be fooled into thinking it is going to be easy to do.  Sometimes it can be intercepted and not go as planned.  We must remain focused on the goal.

Recently, I was privileged to hear Coach Jerry Kill speak.  As he addressed the audience, he left an impression that will not be easily forgotten.  He had an eight-count message for students or any team members, and per my notes it went something like this … set, hut.

And of course… Eat well. Sleep well. Exercise. Give back. Repeat. Persevere. 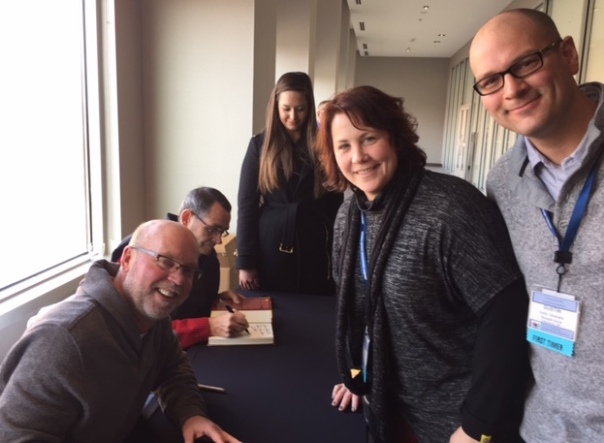 Take Your Best Shot at Night Driving and go Varoomaloom Zoom
taking it Strong to the Hoop, Hoop Genius, and be a Game Changer.

Recently, I had the opportunity to hear author John Coy speak to the Southwest Minnesota Reading Council in New Ulm, Minnesota on the campus of Martin Luther College. Coy shared about his experiences with writing books. With being an author of numerous books, one would think Coy’s experiences have been nothing but positive and easy.  This wasn’t necessarily the case, however.  Coy talked about his many failures on the road to success.

Coy grew up being a reader, but had not really given the idea of becoming an author any thought.  It was not something that was considered an opportunity for him.  Once he discovered writing through a book writing workshop offered at the Loft in Minneapolis, he was inspired to author books for children and to get them reading.

Coy shared, “If you get books that address the genuine interest of the kid, it will get them reading.” He found an interest – sports!

One of his books he highlighted was Game Changer. The book takes place in a segregated North Carolina in 1944.

In the morning on Sunday, March 12, 1944, a group of basketball players from the Duke University Medical School thought they were the best in the state and headed across town in Durham, NC. They knew they were playing a basketball game, but didn’t know who they were playing against. The players reached the gym to find the starting 5 of the North Carolina College of Negroes. The Eagles had a 19-1 record under their coach, John McLendon. Because of segregation, they were not allowed to play against white teams. That day the Eagles were going to break that law. Coach McLendon learned basketball from James Naismith, the gym teacher who created basketball. The game between the Eagles and Duke didn’t start so great with both teams not playing well. The Duke team took the lead at first, and then the Eagles took over. The final scores was Duke 44 to Eagles 88!  They played another game, but mixed it up, and it was shirts versus skins this time.
“Nineteen years before Dr. Kings ‘I Have a Dream’ speech, and three years before Jackie Robinson broke the color line in the MLB, black and white players worked together as teammates in an illegal game in a segregated North Carolina.  These players had seen the future, but it would take time for everybody else to see it.” It wasn’t until 22 years later that Texas Western started 5 black players against Kentucky for the national championship and won.  The era of segregated big-time college basketball was ending.  Years later, John McLendon, who was inducted into the basketball Hall of Fame for his phenomenal coaching career, said, “I just wanted to further the idea that we all played basketball, that we all played it well, and that we should be playing it together.”  Today, people don’t think twice about players of different skin colors.  It took courage for them to play together. “Coach John McLendon and those brave players who rose to the challenge in the secret game were years ahead of their time.”

For his research, Coy talked with 5th graders just like Jonah about their experiences. The 5th grade classes suggested changes on his novels. Sometimes the feedback was on 1 chapter, 6 chapters, or all 53 chapters of the book; it was their choice. The feedback resulted in more than 200 changes in his 4 for 4 series, including: Top of the Order, Love of the Game, Eyes on the Goal, and Take Your Best Shot.

Aside from his former fifth grade status just like Coy’s middle level, 4 for 4 series, it was appropriate to ask Jonah to guest blog with us because last year he selected John Coy’s, Take Your Best Shot, for his birthday book at school.  At Jonah’s school, the birthday boy or girl can select a book to purchase in his or her own birthday honor, and have his or her name and birthday added to the inside cover; he or she gets to be the first to check out the book and then share it with others.  It’s a fun opportunity for students, which they enjoy.

It’s not all fun and games though…writing is about taking risks.  Coy shared about his rejection letters and learning patience while waiting for his books to be published (about six years for a picture book).  There is give and take needed when working with a publisher and illustrator.  Sometimes things don’t go the way they are expected.  That is life.

Coy’s stories consist of fiction and non-fiction works.  Much of his fiction storylines are tailored around sports.  He also writes about sports (and other topics) in his non-fiction writing.

The thing about non-fiction is that we just want some good stories. The new non-fiction is like good fiction with the same things we enjoy about fiction – interesting openings, maintaining the elements of a storyline, and creative characters. 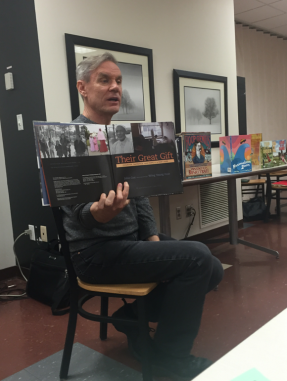 An example of non-fiction work aside from the Game Changer is Their Great Gift. In collaboration with illustrator Wing Young Hwie, Coy was asked by the editor to write the story to match the pictures of immigrant families. The story of Hwie’s grandmother’s arrival to the United States is shared at the end of the story. It is about how her story changed Hwie’s story.  Likewise, Coy shared his own experience of attending college and the impact it had on his own life.  He estimated that there is approximately half a million dollars difference between the earnings from a high school degree and college degree in a lifetime. This story is an example of how we can change are own lives in a big way, but more importantly impact the lives of those to come. 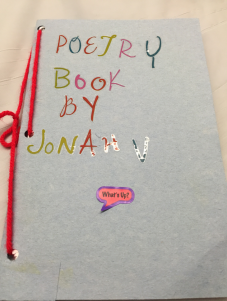 Coy leaves us with a final thought about writing.  “There is a lag time between what we need and what we have.”  John tells students, “You might have to be the one to write them.”  There is an author in all of us; we just need to tell our story.

Check out www.johncoy.com for more details on Coy’s work.
Check back to www.educonnections.org for more of Jonah’s works in the future. 🙂

Thanks, @johncoy23, for the inspiration for this week’s blog – and for inspiring the next generation of readers and writers.