This is a special guest blog post by Dr. Wendy’s niece, Haylee, whose farmer found peace while looking directly into the eyes of death.

Haylee Spronk is a daughter of the King, created by the Father, redeemed by the Son, and renewed by the Holy Spirit. She currently lives on a farm in rural Minnesota with her farmer, 2 sons, a daughter, pigs, and a couple cats. Haylee grew up in a “loosely” defined family with 2 brothers, 3 sisters, and lots of foster siblings. Her foster siblings inspired her to pursue her bachelor’s in social work and eventually a degree in clinical social work from St. Thomas/St. Catherine’s University. She has worked with the elderly population in nursing homes and hospice and loves the stories of the geriatric population. She has also spent time working with those who struggle with mental illness and trauma. She enjoys baking family recipes, being average at triathlons, a good cup of coffee, weird foods, and spending time in deep conversations with those she loves.

“Just pray for my safety” is all the text said from my farmer. My heart just stopped, and I typed back, “Why…” I never received a reply to that text message. My father-in-law knocked on the door and said words that stopped my world point blank. “I called 911, Alex is stuck in a grain bin.”

My head immediately went to all the news articles about farmers drowning in a bin of corn and the time it takes to save a person from a bin.

My father-in-law directed me to the bin and said I could talk to my farmer through the walls. What do you say? What if this is the last time I get to talk to him? As I talked to him through my tears, he simply told me, “Just pray and get as many people to pray for me as you can.” I prayed with him through that bin wall and immediately ran to text people who I knew would drop to their knees.

What is the difference between a grain entrapment and a grain engulfment? An entrapment occurs when a victim becomes buried in grain beyond the point of self-extrication, while an engulfment is an incident where the victim is completely buried or submerged beneath the surface of the grain. Approximately half of grain entrapments lead to engulfment which in turn are almost always fatal (Purdue University, 2011).

My farmer had been working in the bin due to a leaking roof causing pillars of rotten corn. The corn was not getting through the auger, so he had to go in and break up the corn. We needed that corn to feed the pigs.

One of those pillars broke loose, sweeping my farmer off his feet, pushing him to the side of the bin and trapping him against the bin wall. He managed (miraculously) to get his phone out of his pocket and call a hired man to shut down the auger. My farmer was gripping a bar in one hand and calling with the other praying he would not get sucked in the running auger.

Once the auger was safely shut-off, the corn had nowhere to go but pile up around him. Ultimately, the incident left his head and arms free, but corn pressed on his back up to his shoulders. It may seem like an easy task to just pull him out, but it wasn’t possible. My farmer said even when the corn was to his waist, he could not really pull himself out. Think quicksand situation. The scary part was more corn could break loose at any point and cover him completely.

Why does out-of-condition grain contribute to an increased risk of entrapment? Grain that has not been dried properly (Or in our case water leaked in) will begin to spoil and form crusting, or large clumps of grain glued together by the mold and spoiled material. This crusted material can prevent the grain from flowing freely and causes plugging at outlets. To maintain flow through the outlets, workers will enter the grain storage structure and use long pipes to reach the outlet to break up the crusted material. This may expose them to crusted surfaces covering voids or sudden flows of grain that are nearly impossible to escape from. In addition, crusted material can stick to the walls of the storage structure. A worker who attempts to break the crust from the wall from below can be buried under an avalanche of grain from the wall (Purdue University, 2011).

Outside the bin, first responders arrived on the scene and began to climb the 100 foot stairs to the top of the 80 foot bin. Each step they took caused a little more corn to slide towards my farmer.

My mother-in-law and I watched helplessly as people scurried about trying to assess what the next move was going to be. The amazing part was the few texts my mom-in-law and I had sent brought about a flood of people arriving to help. Our pastor arrived and prayed with us through his shaking hands. In my head I just kept praying, “He’s scared Lord, just let him be calm and breathe.” I just could not pray long words, I just wanted God to rescue him. “Please Lord, just let him live.”

Even if a living victim is roped, they cannot simply be removed that way. Grain creates friction that resists the force used to pull them out. It requires 400 pounds (180 kg) of force to lift a victim buried up to their waist; removing a human completely trapped in grain takes 900 pounds (410 kg). Both of these amounts are above the level that can cause permanent spinal column injury (Purdue University, 2011).

Time seemed to slow down yet speed by in that situation. I know at some point the first responders came and told us they had gotten the corn shields around him. Imagine a 50-gallon plastic drum with the top and the bottom cut out. The drum then cut into 3 pieces to slide in around my farmer and keep the corn from continuing to press against him.

I remember reading in a newspaper about how the first responders run drills to practice saving people from grain bins. I am incredibly grateful they knew exactly what to do and owned the equipment to do the work.  Once the corn shields were in place, my farmer was not in as much danger because the corn had less chance of going over his head. 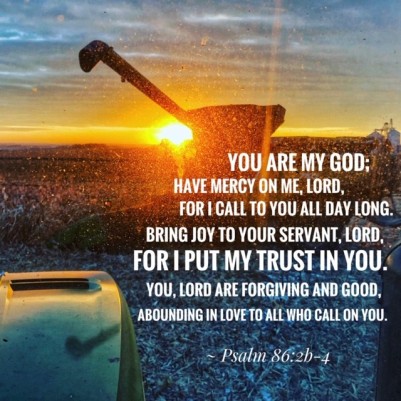 I was so busy praying, “God rescue him,” I did not even think about what damage could be done to his legs. He had been stuck for at least 2 hours at this point. The pressure on his legs can do damage when the blood circulation gets cut off and can lead to muscle injury.

I also had no idea what he had been doing before he was trapped. Did he have a broken leg, or did something get pinched? I was thankful he was safe and alive but now worried about what condition he might be in.

The first responders are trained to prepare for the worse but hope for the best. They called an ambulance in from Pipestone with paramedics with more training they assured us. They also discussed having a helicopter nearby and I believe the helicopter was flown to the Pipestone hospital just in case.

Time stretched closer to 2 and half hours and first responders told us it wouldn’t be too much longer before they would have him out. Responders used a firetruck ladder with a stretcher to reach the top of the bin.

I had a friend pack a bag for me because I had no idea if we would be going to Pipestone or Sioux Falls depending on my farmer’s condition. We all waited with our breath held. I asked friends near me to share stories about their day and what they had been up to just to pass the time. I did not want my mind to go to places it should not go, all while continuing to pray.

What I did not know was the flood of prayers surrounding us. This flood was much more powerful than any flood of corn. From the few text messages my mother-in-law and I had sent, my farmer was blanketed with prayers. (Afterwards, my farmer shared that within 10 minutes of those texts being sent out, he felt an overwhelming sense of calm). He even began praying for me and our children instead of his safety. He said he knew he was going to be okay no matter what but wanted us to be okay.

Our niece had recently started praying for my farmer and me out of the blue. Our 4-year old daughter told our pastor, “Jesus will save him with His big strong arms.”  My parents were on a vacation but by the time my farmer and I had reached the ER, a pastor friend of theirs was waiting for us with prayers and a hug. The amount of text messages telling us they were praying was overwhelming. I felt their prayers were literally holding back the corn and saving my farmer’s life. 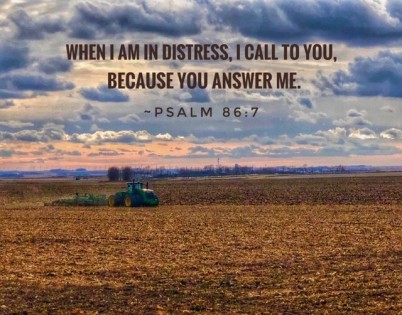 I do not think I can even write the emotions I felt when my farmer came out of that bin. I joked with him; I have never been so glad to see his bright red beard (I could tell it was him the second he came out because of his beard.)

Even more relief washed over me as I saw him hold his neck up. My mother-in-law wrapped her arms around me and said, “I see him holding up his neck! Tears streamed down my face because he was alive and moving okay. Once the fire truck ladder brought him down, I saw him move his legs too. It was such a beautiful sight.

Everything was going to be okay and God had answered our prayers in a big way. 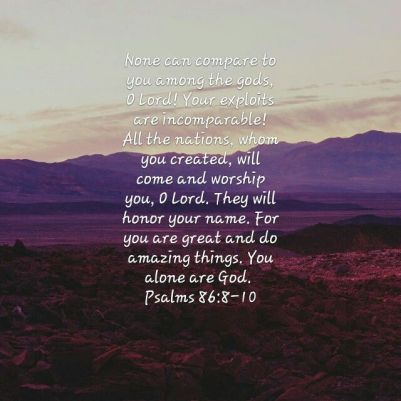 The crew put him in an ambulance, and I rode in the front seat. I joked with him if he wanted a date night all he had to do was ask! He laughed back and it was such a beautiful sound! I could not really talk to him on the ride to the hospital which was grueling because I wanted to hug him so badly!

The doctor examined him and stated my farmer would just need some labs, and we would be free to go. It was so mystifying to think my farmer might die and now we would just be walking out of there.

Sometimes it feels so surreal all of it happening. People ask if there is any long-term consequences but my farmer just felt stiff and sore like he had run a half marathon. Eventually, the soreness went away, and he went back to work. My farmer worked in the same bin 2 days later with some precautions in place. He stated that he has no lingering fears or dreams and attributes it to the power of prayer.

God worked in the prayers of the people surrounding us to keep the corn from moving, keep my farmer calm, and the ability to walk away from a very dangerous situation with a better understanding of His power and might and ability to save. I think the psalmist David stated it the best:

Haylee’s farmer was saved that day. Emergency personnel who witnessed this rescue were jubilantly sharing with others about the grain bin miracle. ♥ 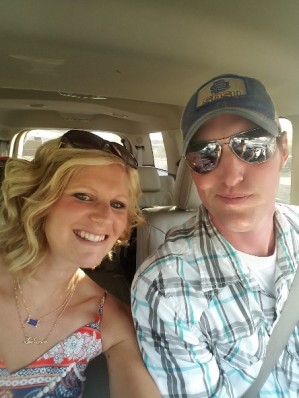