It is a quiet sound…the soft sound of a music box.  The one in my hands is not mine, but it brings me back to a time when I held my own music box as a little girl.  Imagine – a satin-lined, pastel pink box that could be held in the hands of a young girl.  Inside is a ballerina who spins to the music when gently opened.  Holding this music in my hands that is not mine brought me back to being in the middle of my yellow-accented bedroom more than 30 years ago.  This instant time travel was simply from the chime of a few beats of this quiet music. My mind picked up the memory, and started telling a story within seconds.

Amazing what a memory can do – it can tell our stories.  Recently this past week, author/speaker, Tracy Nelson Maurer, spoke on the campus of Southwest Minnesota State at the Southwest Minnesota Reading Council’s Fall Conference.  Tracy shared three keys to writing success: inspiration, information, and imagination.  She sparked our memories and helped us see our stories.  We all have stories to share.

This past week was full of stories at SMSU sparked by memories as we celebrated Homecoming 2017.  It was not a standard week of Homecoming festivities at SMSU this year, however.  We are celebrating our 50th year as an institution, a community, a family.  This week allowed us a time to share memories, tell our stories, and make new memories to share in the future. 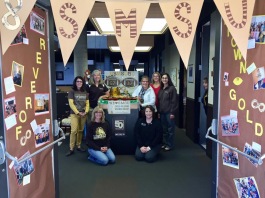 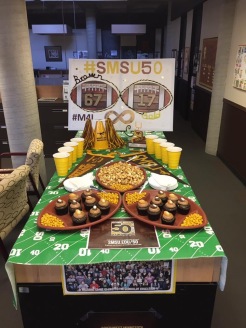 We all have a memory and a story to share.  Continue to share them – as we connect with the past and storytell in the future.  Let us inspire, inform, and imagine together. Listen to the soft music, and let it play. 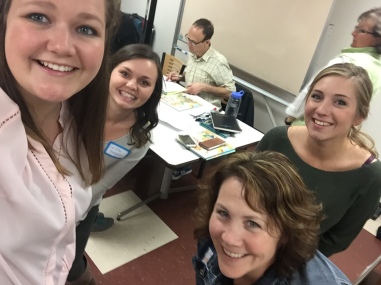 Recently, Minnesota author/illustrator Mike Wohnoutka addressed the Southwest Minnesota Reading Council hosted on the Martin Luther College campus in New Ulm, Minnesota.  I was privileged to attend with a former student-teacher gone teacher and two teacher candidates.  It was an evening filled with learning, laughter, reading, reflecting, doodling, and discussion.  What does a cat got to do with it, you ask?  Let me tell you….

Growing up with three older brothers, Mike Wohnoutka loved to draw, and he was determined to do well. From early on he would go to his room to read to get away from a little of the noise. He displayed talent early on, and his Headstart teacher noticed right away.  She wrote a note on his report card indicating that he was an artist and that he should continue to draw. Later on in life his high school teacher suggested that he go to the library to learn about and study others’ works.  He then went on to enter a contest in high school with a portrait of his dad, which drew him on the path to an art school in Savannah, Georgia with a 4-year scholarship.

Fast forward to today, and you will find that Mike had multiple opportunities to try out his talents – sometimes noticed and sometimes unnoticed.  His talent is obvious and telling. He drew a cartoon masterpiece within seconds right before our eyes. It was incredible.

Throughout his time as a write and illustrator, Wohnoutka has had opportunities to work with a plethora of talented folks.  He shared about his life as an author/illustrator and how each day starts with sitting in his study and thinking. It usually involves some coffee; sometimes there is music, sometimes there isn’t.  “Think about who. Think about what.”  That is telling lesson right there, and one we agree with as a principle.  Dr. Wendy & I tell our teacher candidates that we teach learners, not subjects. We teach who, not what.  When writing This is Not a Cat, Wohnoutka started with character development. That makes sense and is where we all should start – with the who, with us.

He talked about one particular work that we loved to hear about, to read about, and now to share with our students.  This is Not a Cat. It reminded us that what we see is not always what we should believe.  It also made me think about not being too overly confident with a decision; there is room for error in that suit.  The mice in this picture book are pretty scared when they see a cat, which turns out to be a rat in a cat suit.  Later, a real cat hunts that rat.  This made me think of the phrase “what goes around, comes around.” Karma.

So many lessons in that simple but awesome book.  Maybe I am grasping at straws but so be it. I saw the talent first hand. I am no literary award granter, but I like a book that can hook a reader and share a lesson or two.  If it can cause a little suspense and some laughter, even better.

In closing… recently our SMSU colleague family has experienced deaths that have caused us to reflect on what is important.  What is important to you? Find out and stay the course… Life is too important and too short not to know.  Know what is a cat and what is not.

Take Your Best Shot at Night Driving and go Varoomaloom Zoom
taking it Strong to the Hoop, Hoop Genius, and be a Game Changer.

Recently, I had the opportunity to hear author John Coy speak to the Southwest Minnesota Reading Council in New Ulm, Minnesota on the campus of Martin Luther College. Coy shared about his experiences with writing books. With being an author of numerous books, one would think Coy’s experiences have been nothing but positive and easy.  This wasn’t necessarily the case, however.  Coy talked about his many failures on the road to success.

Coy grew up being a reader, but had not really given the idea of becoming an author any thought.  It was not something that was considered an opportunity for him.  Once he discovered writing through a book writing workshop offered at the Loft in Minneapolis, he was inspired to author books for children and to get them reading.

Coy shared, “If you get books that address the genuine interest of the kid, it will get them reading.” He found an interest – sports!

One of his books he highlighted was Game Changer. The book takes place in a segregated North Carolina in 1944.

In the morning on Sunday, March 12, 1944, a group of basketball players from the Duke University Medical School thought they were the best in the state and headed across town in Durham, NC. They knew they were playing a basketball game, but didn’t know who they were playing against. The players reached the gym to find the starting 5 of the North Carolina College of Negroes. The Eagles had a 19-1 record under their coach, John McLendon. Because of segregation, they were not allowed to play against white teams. That day the Eagles were going to break that law. Coach McLendon learned basketball from James Naismith, the gym teacher who created basketball. The game between the Eagles and Duke didn’t start so great with both teams not playing well. The Duke team took the lead at first, and then the Eagles took over. The final scores was Duke 44 to Eagles 88!  They played another game, but mixed it up, and it was shirts versus skins this time.
“Nineteen years before Dr. Kings ‘I Have a Dream’ speech, and three years before Jackie Robinson broke the color line in the MLB, black and white players worked together as teammates in an illegal game in a segregated North Carolina.  These players had seen the future, but it would take time for everybody else to see it.” It wasn’t until 22 years later that Texas Western started 5 black players against Kentucky for the national championship and won.  The era of segregated big-time college basketball was ending.  Years later, John McLendon, who was inducted into the basketball Hall of Fame for his phenomenal coaching career, said, “I just wanted to further the idea that we all played basketball, that we all played it well, and that we should be playing it together.”  Today, people don’t think twice about players of different skin colors.  It took courage for them to play together. “Coach John McLendon and those brave players who rose to the challenge in the secret game were years ahead of their time.”

For his research, Coy talked with 5th graders just like Jonah about their experiences. The 5th grade classes suggested changes on his novels. Sometimes the feedback was on 1 chapter, 6 chapters, or all 53 chapters of the book; it was their choice. The feedback resulted in more than 200 changes in his 4 for 4 series, including: Top of the Order, Love of the Game, Eyes on the Goal, and Take Your Best Shot.

Aside from his former fifth grade status just like Coy’s middle level, 4 for 4 series, it was appropriate to ask Jonah to guest blog with us because last year he selected John Coy’s, Take Your Best Shot, for his birthday book at school.  At Jonah’s school, the birthday boy or girl can select a book to purchase in his or her own birthday honor, and have his or her name and birthday added to the inside cover; he or she gets to be the first to check out the book and then share it with others.  It’s a fun opportunity for students, which they enjoy.

It’s not all fun and games though…writing is about taking risks.  Coy shared about his rejection letters and learning patience while waiting for his books to be published (about six years for a picture book).  There is give and take needed when working with a publisher and illustrator.  Sometimes things don’t go the way they are expected.  That is life.

Coy’s stories consist of fiction and non-fiction works.  Much of his fiction storylines are tailored around sports.  He also writes about sports (and other topics) in his non-fiction writing.

The thing about non-fiction is that we just want some good stories. The new non-fiction is like good fiction with the same things we enjoy about fiction – interesting openings, maintaining the elements of a storyline, and creative characters.

An example of non-fiction work aside from the Game Changer is Their Great Gift. In collaboration with illustrator Wing Young Hwie, Coy was asked by the editor to write the story to match the pictures of immigrant families. The story of Hwie’s grandmother’s arrival to the United States is shared at the end of the story. It is about how her story changed Hwie’s story.  Likewise, Coy shared his own experience of attending college and the impact it had on his own life.  He estimated that there is approximately half a million dollars difference between the earnings from a high school degree and college degree in a lifetime. This story is an example of how we can change are own lives in a big way, but more importantly impact the lives of those to come.

Coy leaves us with a final thought about writing.  “There is a lag time between what we need and what we have.”  John tells students, “You might have to be the one to write them.”  There is an author in all of us; we just need to tell our story.

Check out www.johncoy.com for more details on Coy’s work.
Check back to www.educonnections.org for more of Jonah’s works in the future. 🙂

Thanks, @johncoy23, for the inspiration for this week’s blog – and for inspiring the next generation of readers and writers.